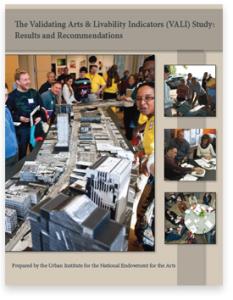 The report examines the research on NEA Our Town projects to determine whether proposed indicators were the correct ones for measuring project impact.

Overview This report presents the findings of an effort undertaken by the Urban Institute to validate a set of candidate indicators for creative placemaking initiatives. Creative placemaking is described as a process or endeavor in which “partners from public, private, non-profit and community sectors strategically shape the physical and social character of a neighborhood, town, city or region around arts and cultural activities.”

The National Endowment for the Arts (NEA) promotes creative placemaking with its flagship Our Town initiative, which has provided grants to nearly 200 communities across the United States since 2011. The NEA hypothesizes that successful creative placemaking interventions will have positive effects on one or more dimensions of community livability:

The NEA proposes to develop a resource or system of indicators (five to seven for each dimension) for which data are available nationally (such as Census data) to help communities better understand and communicate the value of their creative placemaking efforts.3 The NEA initiated the Validating Arts and Livability Indicators (VALI) project to qualitatively validate or “ground truth” its candidate indicators. The validation effort sought to assess which of the indicators and/or data points “rang true” to community representatives in their conceptual dimensions of livability, which indicators or data were not perceived to do so, and which ones may require additional research.

We used three methods to conduct the qualitative validation of the candidate indicators: site visits to six Our Town grantee sites; a day-long convening with representatives from four different Our Town sites; and a focus group with experts who were not involved in creative placemaking efforts. Grantee sites participating in the validation included equal numbers of rural and urban communities and reflected a variety of types of creative placemaking project. Each site visit took approximately two days. Visits included five to nine individual or small group semi-structured discussions with people representing organizations operating in the Our Town project or its target area.

For the site visits and the day-long convening, we sought two types of feedback. We asked respondents how well a set of community-specific data visualizations (maps and bar charts) fit their perceptions of the real-world conditions driving those indicators. We obtained feedback on the appropriateness of the selected indicators (independent of the data values) for their respective livability dimensions and, separately, for the community’s creative placemaking effort. We also sought suggestions for other potential indicators of outcomes from creative-placemaking efforts. [Executive Summary]

Name: National Endowment for the Arts