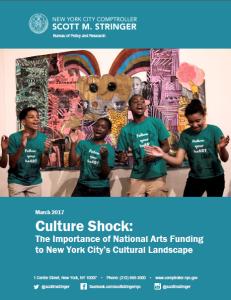 The report released by the New York City Comptroller, “Culture Shock: The Importance of National Arts Funding to New York City’s Cultural Landscape,” highlights how the NEA supports arts and educational programs across the five boroughs of New York City and profiles four neighborhood-based arts groups that would be impacted.

“I look forward to an America which will steadily raise the standards of artistic accomplishment and which will steadily enlarge cultural opportunities for all of our citizens. And I look forward to an America which commands respect throughout the world not only for its strength, but for its civilization as well.” – President John F. Kennedy in 1963, laying out his vision for what would become the National Endowment for the Arts.

Two years after President Kennedy spoke these words, the National Endowment for the Arts (N.E.A.) was founded. It was tasked with a broad and lofty mission – to encourage arts scholarship, expand arts education, and support arts programming across the United States. To this day, the N.E.A. plays a critical role in preserving the nation’s cultural heritage and expanding access to this rich artistic legacy.

Since the election of President Trump, threats to shutter the N.E.A. have been well publicized. The President’s transition team targeted the Endowment—as well as the Corporation for Public Broadcasting and National Endowment for the Humanities—as a potential target for elimination, and a recent memo from the White House budget office confirmed these intentions

This report by New York City Comptroller Scott M. Stringer argues that eliminating the N.E.A. would have a significant impact on the City, disrupting funding for hundreds of cultural organizations and jeopardizing programs for the millions of New Yorkers they serve. Organizations supported by the N.E.A. have an outsized impact on the city, delivering arts programming and education in scores of neighborhoods, spurring creativity and critical thinking, and providing thousands of jobs to local residents.

Specifically, this report found that:

Though the N.E.A. is hardly the largest donor to arts and culture in New York City, its grants represent an important imprimatur for nonprofits of all sizes. The competitiveness of the selection process and prestige of the N.E.A. invariably attracts additional foundation, corporate, and individual giving. For organizations like Arts East New York, DreamYard, Bronx Council on the Arts, and The Laundromat Project (all profiled in this report), grants from the N.E.A. elevated their profile, attracted new funding, and amplified their impact.

In short, the cultural ecosystem the N.E.A. supports is essential to the vitality of New York City and the nation at-large. From the school house to the retirement home, the arts provide a medium for self-understanding and self-expression. They are a means for engaging different cultures and heritages as well as cultivating and sustaining a collective identity.

A robust and healthy cultural sector supports a robust and healthy democracy and economy. New York City is a testament to this linkage. The elimination of the N.E.A. would be broadly felt, in every borough and in every museum, theater, school, and community. [Executive Summary excerpt]