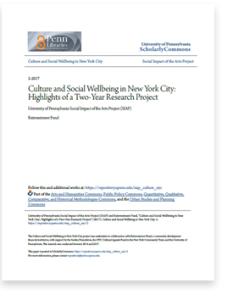 Understanding the social value of the arts and culture in New York City neighborhoods was the goal of the research undertaken between 2014 and 2017 by Penn's Social Impact of the Arts Project (SIAP) in collaboration with Reinvestment Fund. This brief is a summary of the conceptual framework, data and methodology, findings and implications of the research discussed in the full report--The Social Wellbeing of New York City's Neighborhoods: The Contributions of Culture and the Arts (March 2017).

Over the past several decades, much attention has been devoted to assessing the economic impact of the arts and cultural activity on cities. Most of these studies focus on the role of major venues—like museums and performing arts centers—in improving a city’s attractiveness to out-of-towners and young, college-educated “creatives.” By contrast, the role of the arts in enhancing the lives of ordinary urban residents, especially those who live in moderate- and low-income neighborhoods, has received relatively little attention.

Understanding the social value of the arts has been the goal of the Culture and Social Wellbeing in New York City project undertaken by the University of Pennsylvania’s Social Impact of the Arts Project (SIAP), in collaboration with Reinvestment Fund, a community development financial institution.

The project has been guided by the idea of a neighborhood cultural ecosystem. That is, rather than think about a discrete collection of artists, organizations, and participants scattered across a city, we believe that how these cultural assets come together in particular neighborhoods matters. It matters for practitioners active in the cultural sector, by encouraging collaboration and innovation. It particularly matters for residents, because cultural activities have spillover effects that improve people’s lives, whether or not they are active in the local cultural scene.

To understand culture’s impact on communities, however, we need a broad definition of social wellbeing, one that moves beyond a narrow economic standard. Here, the project was inspired by international scholars and policy-makers who have proposed multidimensional approaches to wellbeing that consider not just poverty and income but security, health, education, social connection and a variety of other dimensions. At its core, they argue, wellbeing describes the conditions under which people have what Amartya Sen describes as “the freedom to lead lives they have reason to value.”

One of the great challenges of the project was to take this lofty ideal and translate it into something we could document and measure. In this brief, we describe what we did, what we found, and implications for how to tap the potential of culture to improve the lives of New Yorkers. [excerpt p. 1]