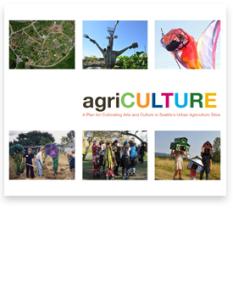 agriCULTURE: A Plan for Cultivating Arts and Culture in Seattle's Urban Agricutlure Sites

Ths report reviews work in Seattle establishing the role that the arts play related to urban agricul-ture in order to foster a culture of urban agri-culture, and make lively places and healthy communities.

Art plays an important role in the programs and public spaces dedicated to urban agriculture, and can contribute to a greater sense of community and making of a place.

Seattle’s Office of Arts & Culture (OAC) is widely recognized as a leader in efforts to fund, plan for, and develop public art. This year marks the 40th anniversary of Seattle’s enactment of the 1% for Art ordinance, making it one of the early adopters of a model that has become the U.S. public art funding standard. OAC is recognized nationally as an exceptional program that continually reach-es out to artists to incorporate new art forms and embraces new ideas for artistic interventions.

Seattle is also a leader in urban agriculture with some of the most progressive policy, codes, and funding in the country. Significant recent achievements include the creation of the Seattle Food Action Plan, celebration of the P-Patch community gardening program’s 40th anniversary with expansion to 90+ gardens including innovative models at UpGarden P-Patch and the Beacon Hill Food Forest, and improvements to the city’s two urban farms.

support the City’s work in urban agriculture, the Office of Arts & Culture funded an Artist-in-Residence for Urban Agriculture to create this plan. The plan makes recommendations for how to enrich the culture of urban agriculture by integrating arts and cultural programs into the City’s urban agriculture efforts, and proposes a number of strategies and pilot projects to implement those recommendations. Although the mission of OAC is narrower than the scope of the ideas presented here, some of the recommendations may be funded through the Department of Neighborhoods, other departments, or private funders. [Exective Summary]