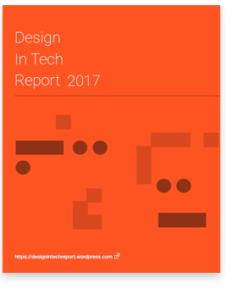 Report identifies and defines computational design as a key driver in the growth of tech businesses. Computational designers are those who deal mostly in code and build constantly evolving products that impact millions of people’s lives.

“In the report John Maeda makes the distinction between “classic” designer, the makers of finite objects for a select group of people (think graphic designer, industrial designer, furniture designer) and “computational” designers, who deal mostly in code and build constantly evolving products that impact millions of people’s lives.”

“Designers who can code and write have always been attractive to tech companies, but Maeda’s report foretells an inflection point for the field. As the distinction between engineering, writing, and design becomes blurrier, design’s role in technology only stands to become more ingrained in the product development process. In the end, design, as a singular field, could become less visible but more relevant.” [Wired, John Maeda: If You Want to Survive in Design, You Better Learn to Code]

The 2017 Report frames computational design as a key driver of accelerated growth, with inclusive cultures @work as vital for tech businesses hoping to lead in design. This report is the predecessor to the 2016 Report which showed peak growth in interest by venture capital firms in design, and highlight significant growth in the acquisition of design agencies by consulting firms like McKinsey & Co and Accenture. Google emerged as a new leader in design. And the 2015 Report which explained design’s rise in value to tech as due to mobile devices and the mass-consumerization of computing. We moved from “tech-led” to “experience-led” digital products as services on smartphones took over and gave access to everyone.